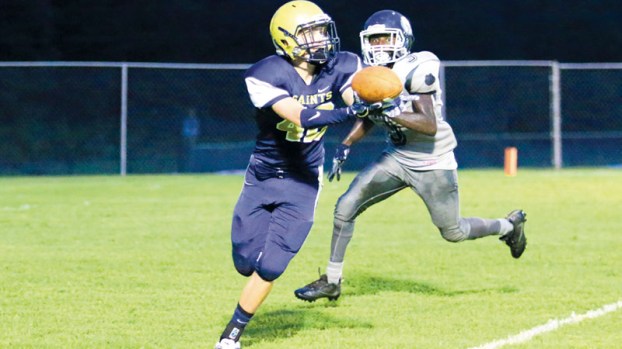 The Prentiss Headlight—Chandler Holloway #42 makes a touchdown catch from quarterback Steven Colson in the Saints' 36-0 win over the CCA Bulldogs.

Saints shut out Bulldogs in first home game of the season

The Prentiss Christian Saints dominated the Christian Collegiate Academy (CCA) Cougars in all phases of the game with a 36-0 victory in the first home game of the season Friday night.

Wade Watkins got the Saints off to a hot start with a 43-yard run for a touchdown. Then, Chandler Holloway caught a 13-yard touchdown pass from Steven Colson for a quick 14-0 lead early in the second quarter.

Jacob Anderson scored on a 24-yard run before halftime to give the Saints a 20-0 lead.

The Saints’ defense opened up scoring in the second half with a tackle by Triston Bridges, resulting in a safety, adding two points to their lead.

Hunter Bolin and Micah Bullock led the defense with six tackles each and Layton Hudson had a crucial sack of the quarterback, stopping a Bulldog drive. Colson continued the scoring attack with a 27-yard run.

Finally, the Saints defense finished up the scoring on an electric 67-yard interception return by Jacob Anderson, culminating in a 36-0 win.

Colson contributed 119 yards of total offense with a rushing touchdown.

The Saints’ defense was dominant, holding the CCA Bulldogs to only two first downs and the first shutout of the season.

Prentiss Christian moves to 2-0 on the season with an open date next Friday.

The Saints return to action on Friday, Sept. 8, traveling to DeKalb to take on the Kemper Academy Rams.

12U team honored by Mayor Dumas

“This has been a special year for you,” said Prentiss Mayor Charley Dumas. “I commend and congratulate you on your... read more