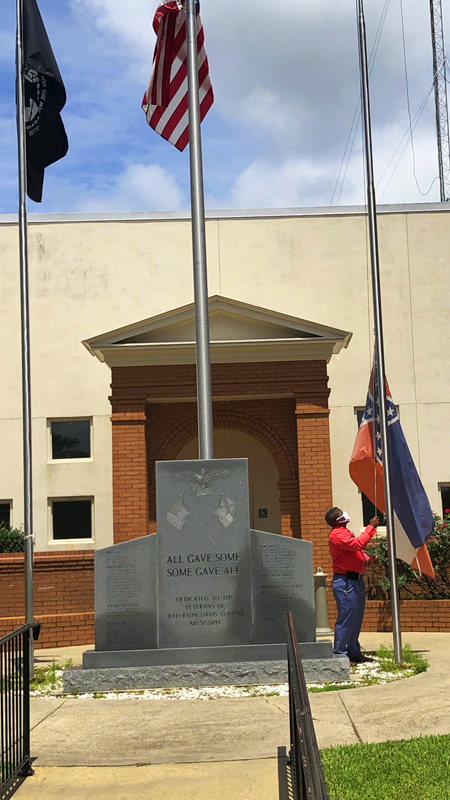 District 3 Supervisor Demarrio Booth removes the State of Mississippi flag from the Jefferson Davis County Courthouse Monday afternoon. On June 28, the Mississippi Legislature passed a bill to change the state flag. Both the Senate and House took votes on a resolution that allowed the Legislature to suspend its rules and introduce House Bill 1796  to change the flag. The House passed the resolution 84-35, the Senate passed it 36-14.  A nine-member commission will be established to present a new state flag option by Sept. 14, and the public will vote on it on Nov. 3. The new flag is not allowed to include a Confederate emblem and must include the words “In God We Trust.”  Mississippi Governor Tate Reeves signed the bill on June 30. “The people of Mississippi, black and white, and young and old, can be proud of a banner that puts our faith front and center,” said Gov. Reeves. According to the text of the bill, the former flag must be retired within the next 15 days and the state Department of Archives and History has to develop a plan for the dignified and respectful removal of the former official Mississippi State Flag.

Jefferson Davis County Sheriff’s Deputies recovered a stolen ATV after it was located in Perry County. The side-by-side was stolen... read more