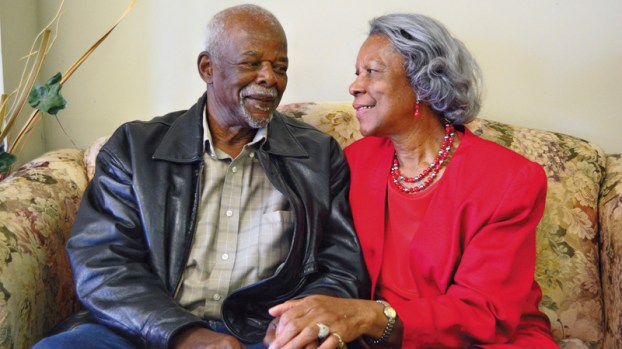 The Prentiss Headlight— Roy and Bettie Drummand have been sweethearts and best friends for more than 55 years.

Roy Drummond of Arm first noticed a pretty little Oakvale girl at a ball tournament at Silver Creek but she states she really didn’t notice him at the time. After all, a 13 year old girl has other things on her mind besides boys, but he did not forget that first meeting and believes it was love at first sight.

“It wasn’t until we were both at J. E. Johnson,” states Bettie Drummond, “that he actually pursued me and we became a couple through high school.”

Even some of their teachers noticed their special relationship and believed they would be married. “I believe God ordained it to be,” said Bettie, “because He knew what He was going to call us to.”

In 1962 the couple planned a wedding but things didn’t go smoothly. “Roy was living on the coast at that time and his friend,” remembers Bettie, “our best man, was supposed to pick him up and bring him to the wedding here but his ride never showed up. When we began to wonder if he was going to make it we sent my brother down to pick him up. Well, there was Roy sitting on the porch all dressed and ready. Needless to say the wedding was delayed until the groom got there.”

“The first meal I cooked for Roy of string beans, pork chops and rice was bad,” laughs Bettie. “I could cook but for some reason I got everything way too salty, but he just kept saying it’s good, it’s good.”

The couple states they were happy but not everything was always “hunky dory” and they learned many lessons in those first years.

Roy and Bettie Drummond lived in Gulfport for a while and even spent some time in California but realized back home in JDC was where they wanted to be. Bettie states because, “the Lord knew we were going to have eight children and I needed to be across the road from Mama.”

Drummond was in the National Guard and did two tours in Germany while Bettie was home with the children. Farming had not worked out and his job hauling pulpwood barely took care of their growing family. Bettie sold insurance and timeshares but that took her away from her children.

The couple agreed that the biggest change in their lives came when they became Christians in the early 70s stating they began depending on the Lord and He changed their lives. They fell in love with God and each other all over again.

Bettie stated she asked the Lord for a job that she could be home when her children were and the principal from J. E. Johnson called her to work. Roy began working for the County and later for the Sheriff’s office. Bettie also worked as the first black dispatcher for county.

Bettie states that when the Lord called her into ministry Roy was and still is her biggest supporter. She began Jefferson Davis Outreach Ministry with a radio ministry and after school program for children, adding other aspects as the need has been revealed to her.

“Roy has been so supportive of the ministry, states Bettie. “He always goes with me when I speak and he is our handyman that is always fixing something for us.”

At 77 and 73 years old the couple show no signs of slowing down. Though Roy Drummond has retired from the Sheriff’s office he is the court bailiff and general handyman for the Jeff Davis Outreach Ministry. Bettie is founder and director of the JDOM and very busy ministering to the children of the county. They spend time with their own eight children, 21 grands, and 16 great grands and will be married 55 years in June.

Some advice these long time sweethearts give to young couples for a long and happy relationship is to communicate, and respect each other. Both agree the love of Christ will make the greatest difference in your relationships.

Roy and Betty Drummond, sweethearts and best friends for more than 55 years.